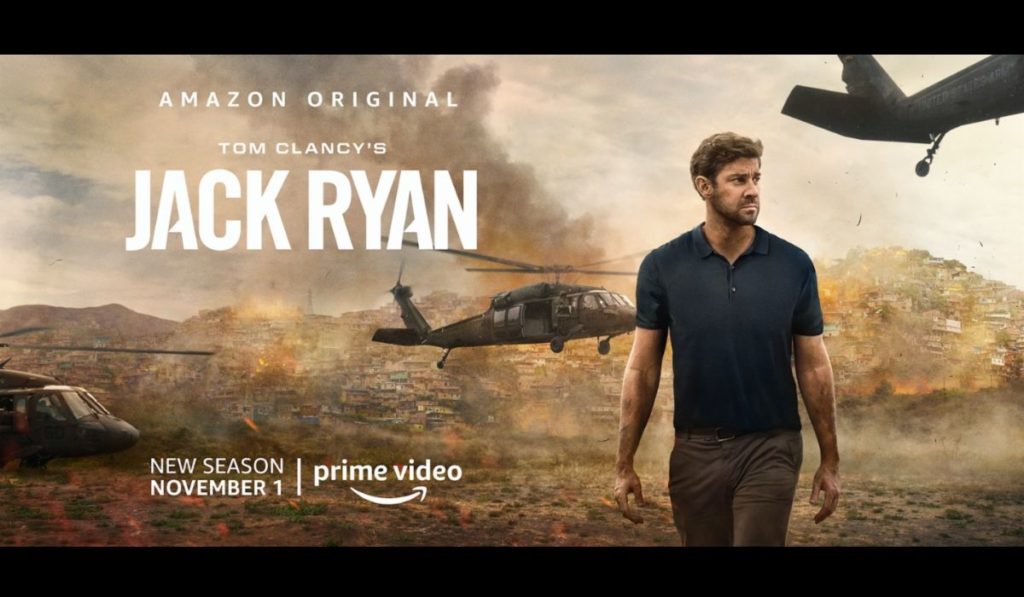 In the second season of Tom Clancy’s Jack Ryan, after tracking a potentially suspicious shipment of illegal arms in the Venezuelan jungle, CIA Officer Jack Ryan, portrayed by John Krasinski (A Quiet Place), heads down to South America to investigate. As Jack’s investigation threatens to uncover a far-reaching conspiracy, the President of Venezuela launches a counter-attack that hits home for Jack, leading him and his fellow operatives on a global mission spanning the United States, UK, Russia, and Venezuela to unravel the President’s nefarious plot and bring stability to a country on the brink of chaos.

Episode 201 : Cargo
Jack Ryan searches for the truth behind Venezuela’s nuclear ties and its imminent threat to the United States. James Greer, about to get sidelined from his new post in Russia, joins Jack in Venezuela and the two find themselves in the midst of a dictator’s re-election effort.
Episode 202 : Tertia Optio
Jack is granted permission from Senator Chapin to stay in Venezuela. President Reyes denies involvement in the assassination of an American Senator. Meanwhile, Jack and Harry team up to follow a lead that could create dissension within the ranks.
Episode 203 : Orinoco
The U.S. Special Activities team lands in Venezuela where Jack’s intel leads them to a militia guarded compound. The mission goes awry and one of the team members gets left behind in the jungle. President Reyes’ opponent, Gloria Bonalde, proves to be a real contender in the upcoming election.
Episode 204 : Dressed to Kill
Relieved of duty in Venezuela, Jack follows a new trail to London and seeks the help of MI5, only to discover the man he’s after is also after him. Back in Venezuela, Reyes makes Gloria an offer.
Episode 205 : Blue Gold
Using Max’s daughter as bait, Jack and Harry convince Max to meet face to face. Stranded in the jungle, Marcus stumbles across a prisoner camp. Greer visits Gloria hoping to draw a connection between Reyes and her missing husband.
Episode 206 : Persona Non Grata
Reyes accuses the U.S. of tampering with the election. The U.S. Embassy is evacuated. Jack, Greer and Mike November must decide whether to follow orders or go off the grid. Reyes’ men pursue Matice and the American soldiers in the jungle.
Episode 207 : Dios y Federación
The election in Venezuela is moved up. Jack and Mike fight off a raid at the CIA safe house while Greer is interrogated. The Ubarri family must decide to flee or face Reyes.
Episode 208 : Strongman
Jack heads to the Presidential Palace to retrieve Greer. When the polls are shut down, violent protests erupt outside the palace, and Jack must make a decision that could determine his future.

Disney+ Will Likely Not Get an Ad-Supported Tier or Combine Disney+, Hulu & ESPN+ Any Time Soon

Here's Everything Coming to Netflix, Hulu, and Prime Video the Week of June 14, 2021