In their Quarter 3 earnings report, AT&T announced that AT&T TV Now had lost 195,000 subscribers in the third quarter of 2019. This brought the total subscriber count down to 1,145,000 from 1.86 million one year earlier (when AT&T TV Now was still called DirecTV Now).

Cost has been a major factor in the declining subscriber numbers. This chart from Kill the Cable Bill breaks down the price changes from DirecTV Now’s launch to the current price of AT&T TV Now. 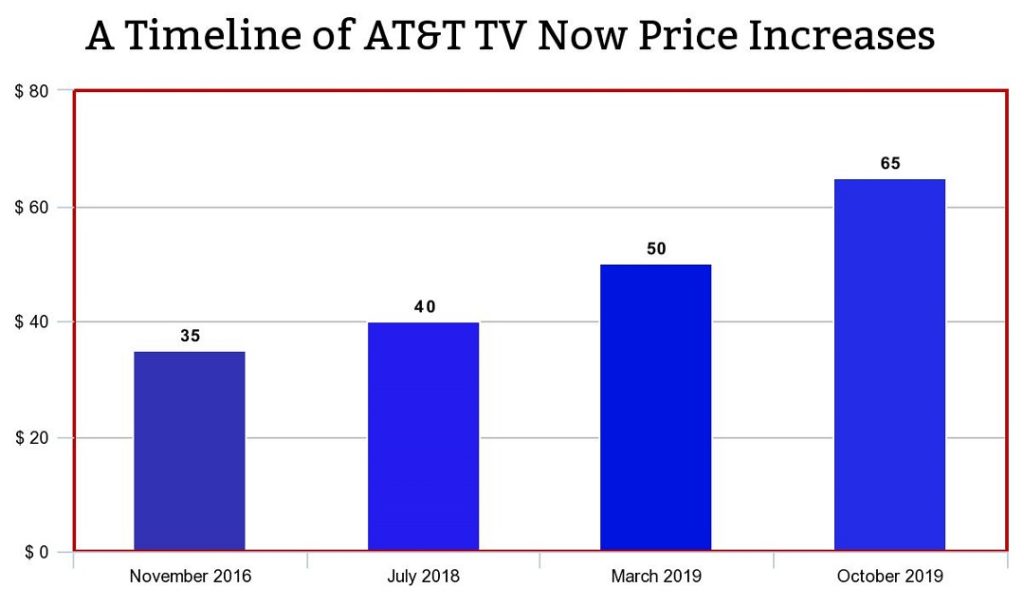 The price went up again in March 2019 which caused some confusion for those with grandfathered plans. Then, in June, DirecTV Now rebranded to AT&T TV Now. In October, another price increase was announced, which went into effect this month. The current price is $65 a month for AT&T TV Now Plus. If you want AT&T TV Now Max, that plan will now cost $85 a month. These numbers make AT&T TV Now one of the more expensive options for live TV streaming.

The rebranding in July likely also played a big part in subscriber losses. While the rebranding didn’t include many big changes for the streaming service, it did cause a lot of confusion for customers (and those of us reporting on the news).

Finally, it seems that AT&T isn’t focused on making AT&T TV Now a major competitor for other live TV streaming services. The company has mentioned their focus on bringing customer to AT&T TV and HBO Max, while leaving AT&T TV Now out of the conversation.

Are you an AT&T TV Now subscriber? Have you left the service to give another live TV streaming service a try? Let us know your thoughts on declining subscriber numbers in the comments below.