Editors Note: We’ve gotten many questions asking if this really is confirmed, so I changed the headline  to say “likely.” I stand by what we wrote and if we are wrong I will be the first to admit it. From our sources, what AT&T’s President said to FierceVideo, and the wording of AT&T TV’s website we feel confident to say that AT&T will require the new Android TV powered set-top box for AT&T TV if you want to use it in your house. Also when we look at all the training materials that AT&T Employees posted online it says nothing about Roku, Fire TV, or Apple TV support. AT&T TV’s website also does not list Roku, Fire TV, or Apple TV support.

This also lines up with what Variety reported saying “AT&T TV service, which will use a “thin client” internet set-top box. On the company’s Q2 earnings call on July 24, CEO Randall Stephenson said AT&T TV will slash customer-acquisition costs by 50% compared with the legacy DirecTV satellite service.”

Cnet also supports this recently saying in their story “the new offering will allow users to stream content to the AT&T TV app on mobile devices and through a box on TVs.”

Update: One AT&T Employee has told Cord Cutters News that you will be required to have at least one AT&T TV branded streaming player. After that, you can use other devices like Roku, Fire TV, and Apple TV.

Would you rather watch a video explaining all of this? Check out our YouTube video with Luke explaining what we know about AT&T TV:

Update: AT&T did respond to our emails only to say that they will be able to share more about AT&T TV customer experience closer to launch.

It is important to remember that AT&T TV is a different service from AT&T TV Now. AT&T TV Now is a rebranded version of DIRECTV NOW separate from the new still unreleased AT&T TV service.

Here is how AT&T describes the new streaming player requirement on the AT&T TV website:

Do I have to use a specific device to watch TV?

The new AT&T TV experience comes with our next-gen device, so you’re all set to watch on your biggest screen. Always on the go? We have you covered—just download the AT&T TV app to your mobile device or tablet so you can stream anytime, anywhere.

This lines up very well with what AT&T’s President of Mobility and Entertainment David Christopher said in an interview with FierceVideo. Here is what FireceVideo posted: “Christopher said that AT&T built its new streaming box for the service [the new DIRECTV streaming service] because the company believes it wouldn’t get all the benefits if it had just made the new DirecTV service an application.” FierceVideo went on to say: “Christopher reiterated the benefits that AT&T executives have previously laid out, namely the low-cost piece of hardware that consumers can install, which will help lower the cost of customer acquisition by eliminating the need for truck rolls and installers climbing ladders to put satellite dishes on roofs.”

This is also supported by the AT&T training documents about AT&T TV that was posted online earlier this month: 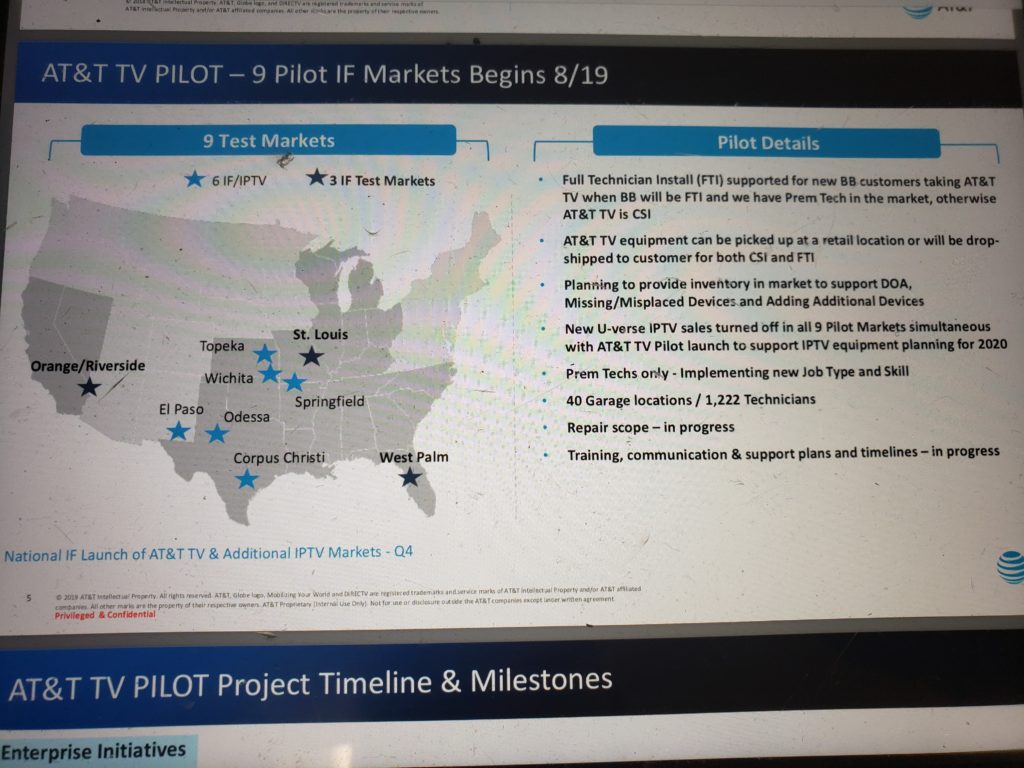 There it talks about AT&T TV equipment being picked up or shipped to customers.

Here is our review of the updated AT&T TV streaming player remote:

We still have many questions about this new streaming player. What price will it be? What will AT&T TV cost? Will this player work if you stop paying for AT&T TV? For now, we will have to wait and see what AT&T TV does next when the service reportedly launches in select markets next month.

Cord Cutters News has reached out to AT&T about the need for a set-top box but they have not replied to our emails at this time.

What do you think of AT&T’s plans to sell you a streaming player to use their service? Leave us a comment and let us know what you think.