Some Disney+ subscribers have noticed changes to TV shows and movies available to stream on the platform.

To start, some episodes are missing from full seasons of TV shows. Reddit currently has a thread where users are adding to the list of missing episodes and seasons being shown out of order. Examples of missing episodes include the “Stark Raving Dad” episode of The Simpsons about a mental patient believing he’s Michael Jackson and Tron Uprising which is missing its pilot episode.

Some content has been edited from original film versions. There were many posts about the changes to the Star Warsfilms specifically. The versions currently on Disney+ appear to be the Blu-Ray versions. These were edited by George Lucas before launching on Blu-Ray to improve image quality and special effects, along with some other updates.

The aspect ratio of some content has also been adjusted to fit the screen, while sacrificing parts of the images that viewers say are necessary for enjoying the content. This post from Twitter showing screenshots of The Simpsons is an example being shared by thousands of people on social media.

All the classic Simpsons episodes on Disney+ are in cropped widescreen format — this means you miss out on tons of great visual jokes, like how Duff, Duff Lite and Duff Dry all come from the same tube. pic.twitter.com/cTy9adulFl

While other content is being shown in its original form, Disney+ has added warnings to movie descriptions about everything from cultural insensitivity to smoking to mischievous behavior. For example, this is the description of The Jungle Book. 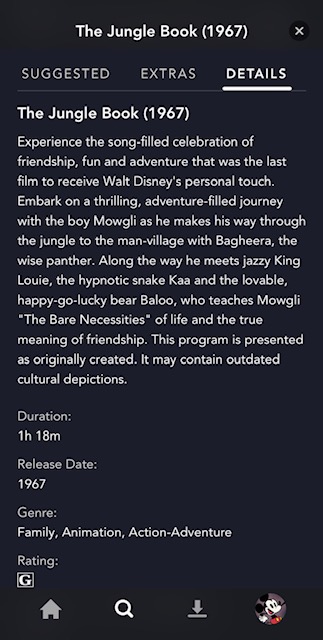 Have you noticed any other changes to content appearing on Disney+? Let us know!

Sling Watch Party: What to Watch with Friends & Family