According to a new study by Cordcutting.com, 44 million adults admit to using a streaming service that they don’t pay for themselves. With numbers like these, it’s hard to not question why the streaming platforms aren’t cracking down on this kind of shared usage.

While password sharing is a violation of the terms of service for most streaming services, most also have multiple user profiles available and allow streaming on more than one screen at a time, so it’s no wonder people are taking advantage of sharing one account between users.

Of the platforms analyzed in the study, Disney+ was the streaming service most people said they weren’t paying for themselves, followed by Netflix. Which kind of makes sense, given that Disney tends to draw a younger demographic in the first place, making it more likely that kids and young adults are using a parent’s account. Disney+ demographic is made up of 64% Gen Z. Netflix saw a rise in the percentage of streamers sharing someone else’s account between 2019 and 2020. But both Hulu and Amazon Prime Video saw a decline in moochers tapping into a friend or paying family member’s account. 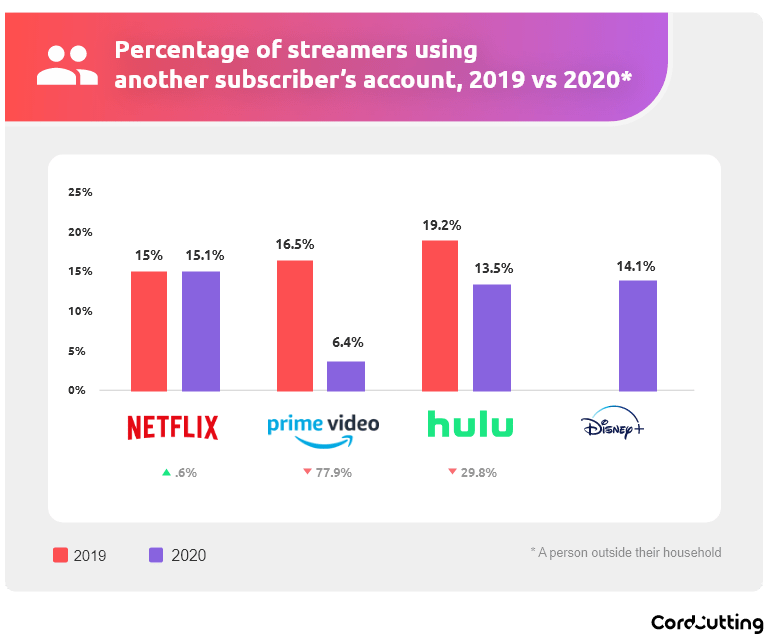 While some cable companies have cracked down on password sharing, these streaming services don’t seem to be overly worried about taking an aggressive stance against the practice, even though Netflix alone is missing out on about $356 million in additional membership fees per month thanks to multiple users sharing an account without paying for their own.