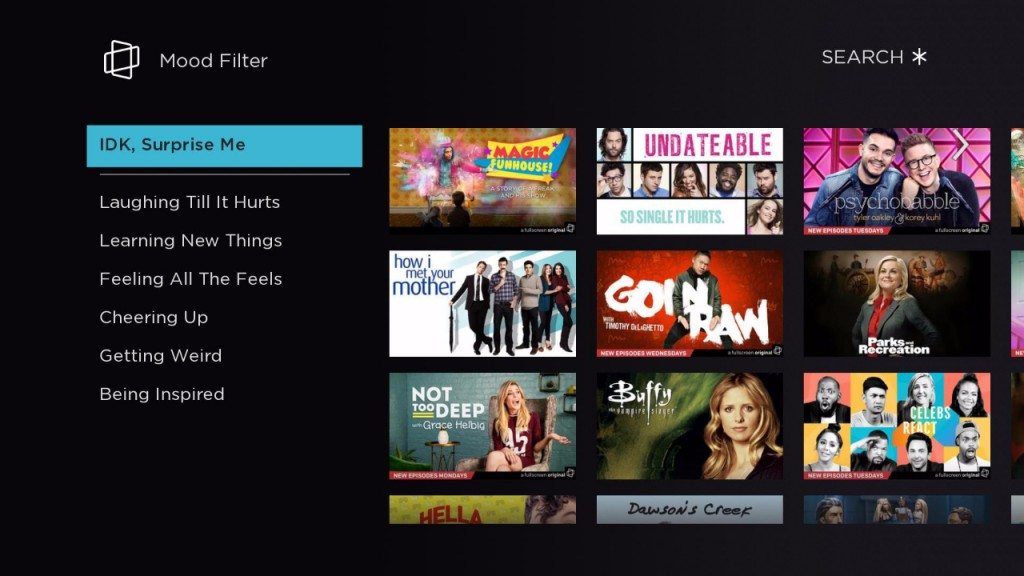 Today Fullscreen Media announced the launch of their  Fullscreen  Roku Channel for Roku players and Roku TVs. With the new Roku Channel Fullscreen subscribers can enjoy the latest episodes of Fullscreen’s freshest hits, including “Shane & Friends,” “H8TERS,” “Shay Mitchell: Chapters” and “Psychobabble with Tyler Oakley & Korey Kuhl” as well as upcoming original series “PrankMe,” starring Corey Fogelmanis (“Girl Meets World”) arriving later this year.
With a Fullscreen Media subscription of $5.99 a month you also get access to a library featuring thousands of hours of available entertainment including “Chuck” and “Undateable” (Warner Bros. TV), throwbacks such as “Buffy the Vampire Slayer” (20th Century Fox Television), “Dawson’s Creek” (Sony Pictures Television), “Reno 911!” (Comedy Central) and blockbuster movies including “Superbad,” “Hitch” and “S.W.A.T.” (Sony Pictures).
About Fullscreen:
Launched in April 2016, Fullscreen is a commercial-free subscription service. A division of Fullscreen Media, the service features a dynamic slate of programming that includes scripted and unscripted original shows, TV and films licensed from studio partners, as well as exclusive content from today’s top creators and personalities. The service is home to original shows including “The Deleted,” “Magic Funhouse,” “Electra Woman & Dyna Girl,” “Jack & Dean of All Trades,” “Keeping Score,” as well as breakthrough talk formats like “Shane & Friends,” and “Not Too Deep with Grace Helbig,” and “Psychobabble with Tyler Oakley and Korey Kuhl.” Fullscreen is available globally on fullscreen.com, iPhone, iPad, Apple TV, Roku, Android Phones and Tablets, Chromecast and via Amazon Channels. Fullscreen Media is majority owned by Otter Media, a partnership between AT&T and The Chernin Group.
You can add Fullscreen to your Roku here: https://channelstore.roku.com/details/158070/fullscreen

Read Previous Updated: Hulu’s Live TV Beta Just Added 70… Read Next Here is Everything FREE on Twitter For the…