PBS, ABC, CBS, The CW, and FOX Are Now Streaming on Apple TV & Roku Via SiMeTV, But Is It Legal?

For about a week now, one of the hottest new streaming services is SiMeTV, which offers access to ABC, CBS, The CW, FOX, PBS, and more for $10 a month after a 7-day free trial.

This has raised a lot of questions about its being legal. Many are pointing to the fact that Roku and Apple both offer the service in their official app stores, so it must be legal. Yet questions linger. They stream NBC from South Florida, ABC from New York City, and FOX from Buffalo, New York leaving many to wonder how they are doing that. SiMeTV even offers content from Canada like CBC and City.

Cord Cutters News reached out to SiMeTV to learn more about the service. The only email we received was an email asking how we learned of the service as it should not be available in the United States. We emailed back with follow up questions but never heard back.

So, we decided to do some digging to see what we could learn about SiMeTV.

SiMeTV has been around for a bit now, and their Facebook Page was created on April 18, 2017. It seems to have really taken off since it was added to the Roku Channel Store. It has been in the Apple Store since August 10, 2016. The domain name was registered on May 18, 2015.

According to Archive.org, it promoted the ability to access ABC, NBC, and CBS starting in 2018 if you lived outside of the US. In 2019, it seems the limitation of not being available in the United States has been removed.

Here is an image from SiMeTV’s website in 2018, saying it was not available in the United States, according to Archive.org: 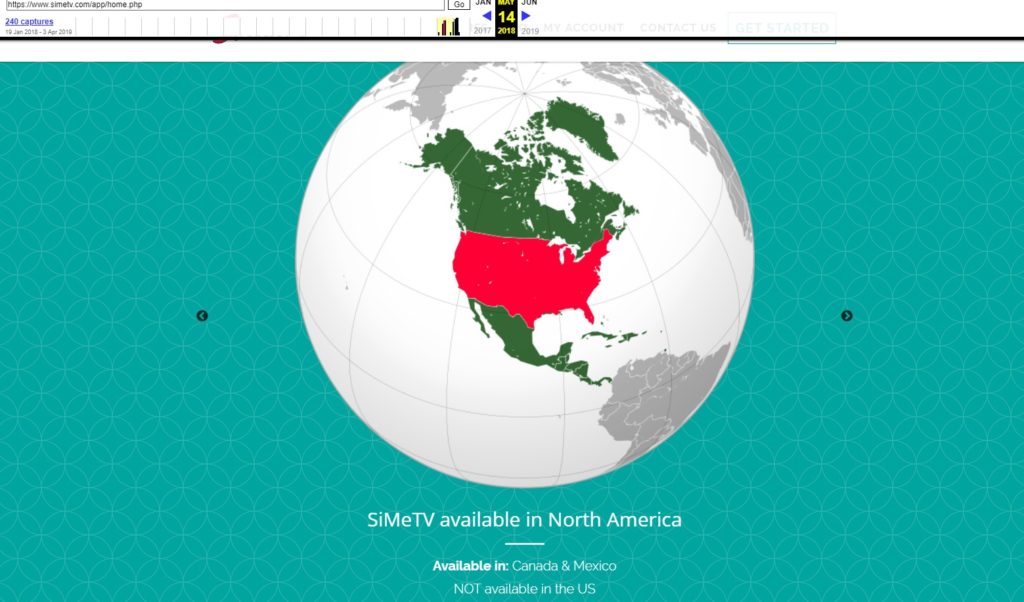 We are not sure where SiMeTV is located. They have no address that we could find. It’s Contact Us page gives a phone number with a 905 area code. According to allareacodes.com, that area code is from Canada and covers the areas just outside Toronto including Hamilton down to Niagara Falls. Sadly, we could not find an address for the company.

We tried to look up their contact information by seeing who registered the SiMeTV website, and they used GoDaddy and the private register option so their information wouldn’t be made public. That is not unusual—even Cord Cutters News did that. Yet it was one more dead end in our efforts to learn more.

We don’t know. For now, it is listed in the official Roku, Google, and Apple app stores. It has been around a long time by Internet standards but is new to the United States.

It is possible that this is a 100% legal service with a small team that has just not been able to get back to Cord Cutters News. For now, we just don’t know enough about the service and its history.

With it being in the Roku, Google, and Apple app stores you would have to assume these companies did their research.

Our hope is someone at SiMeTV will see this post and reach out to Cord Cutters News with more information. We hope this post makes it to someone there who can comment about the service and the contracts they have.

Prime Day 2021 Is Almost Here, But You Don't Have to Wait

Save 50% on MLB.TV: Limited Time Deal

Study: 82% of Broadband Households Subscribe to at Least One Streaming Service