Roku is Dominating the Cord Cutting Market by a Wide Margin

The rapid growth of cord cutting has brought in a ton of new devices to compete for the cord cutter’s dollar including big names such as Google, Apple, and Amazon.

Now a recent survey conducted by Cord Cutters News has shown that cord cutters have a clear favorite streaming media player. According to our survey, over 70% of cord cutters own a Roku and the next closest competitor is the Fire TV with just 33.3%.

We asked cord cutters to think about “What devices do you use to stream your content to?” We also allowed multiple devices to be selected, because we understand many people own more than one streaming media player. (We did have the option for people to write-in a device not listed, but no written-in device came close to even 1%.)

So here are the results of our recent survey: 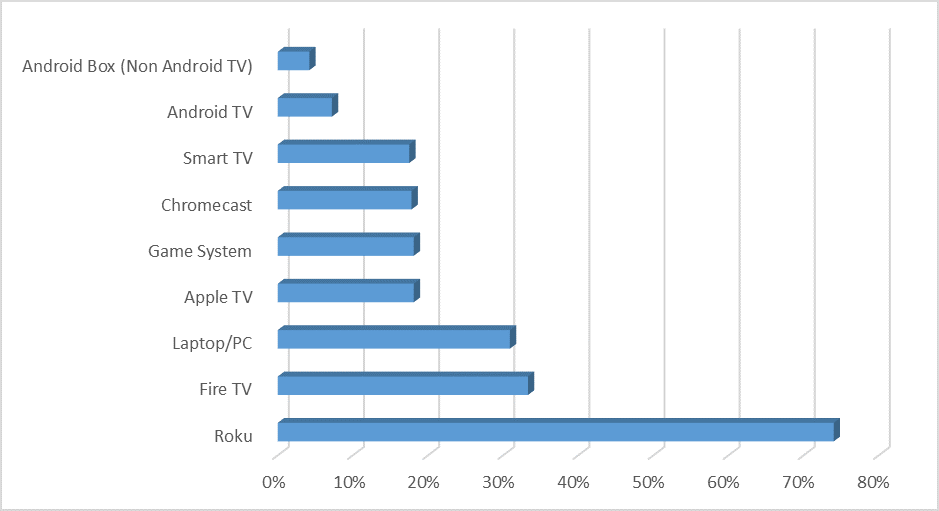 These results are in line with a recent study conducted by the Parks Associates, which showed Roku was in first place followed by Fire TV in a tie for second place not just with cord cutters but with all streaming players.

Many may wonder why Roku would be so far ahead with cord cutters, and while no one has studied why people pick one device over another there are likely a few main reasons.

First, cord cutting is primarily about getting access to the content you want to watch. Roku has by far the most movies and TV shows than any other service. Their open platform gives cord cutters access to not only Fandango Now, their built-in video store, but other stores such as Amazon, Google Play, and VUDU.

The second reason is likely the price points, because Roku has more devices in different price ranges than any other streaming player on the market right now.

So if you have ever wondered why Roku and, to a lesser extent, the Fire TV often get services long before Android TV and the Apple TV the number of units sold is likely a big part of it. Just like any product, streaming services want to be where the largest number of possible customers can be found.